Although we’re out in the countryside, we officially come under the village of Illar in Almeria province, so we’re in the far south eastern corner of Spain. Almeria city is about 15 miles south east of us.

Illar has just over 400 residents, of which there are about half a dozen Brits with holiday homes. It’s a very tight knit and traditional community where everyone only speaks Spanish, which is great for us on a day to day basis as it means we’re learning Spanish much quicker than if we lived somewhere with more ex pats. After all, we wanted to live in and experience Spain – not a mini UK in the sun!

We have two cafes, a little shop and a chemist and just 15 minutes away is the larger town of Alhama de Almeria. And there’s a municipal pool that opens June to September.

We officially sit in the Alpujarras – the foothills of the Sierra Nevada mountains. Half an hour one way and we’re in the mountains, and half an hour the other way is the beach! And the views are amazing!

The airport is just 40 minutes away, so in terms of location we really hit the nail on the head! Sitting up in the roof terrace tonight you would think you’re miles from anywhere, but just 5 minutes in the car and we’re in the centre of the community.

To be truthful we were a little worried about whether we would be accepted what with the whole Brexit thing going on – but we had nothing to worry about. We’re the mad English couple who don’t have a house in the town, just a cortijo in the campo, and who drive a very old blue Santana (made in Spain!). Everyone (with the exception of one grumpy old man who refuses to acknowledge we exist!) has been fabulous and warm and welcoming, and we love it here.

So, a bit more about our place – half an acre with 90 trees and 97 vines and a tiny house that’s just 43 square metres (but they fitted in 2 bedrooms, a shower room and room which is the kitchen / dining / living room. We don’t have much space, but then we don’t need much! The trees are orange, almond, olive, pear, nispero, mandarins, banana, peach and persimmons – strangely I think we’re the only house in Spain without a lemon tree, but we’ll plant one soon.

We have two brick sheds – one serves as the ‘loft’ for any stuff we can’t fit in the house as well as deck chairs etc and the other is a proper workshop. We do also have a bodega – the previous owner made A LOT of wine! We’re in the process of clearing this out to become a storeroom for produce that we grow. It has an earth floor and several months on it still stinks of very old vinegar / wine! Quite a bit of work to do in there yet … The big problem is how to keep this room cool – we’re working on that! We have the old solar system we took out of the house so we might be able to use that …

So, enough words, time for some new pictures: 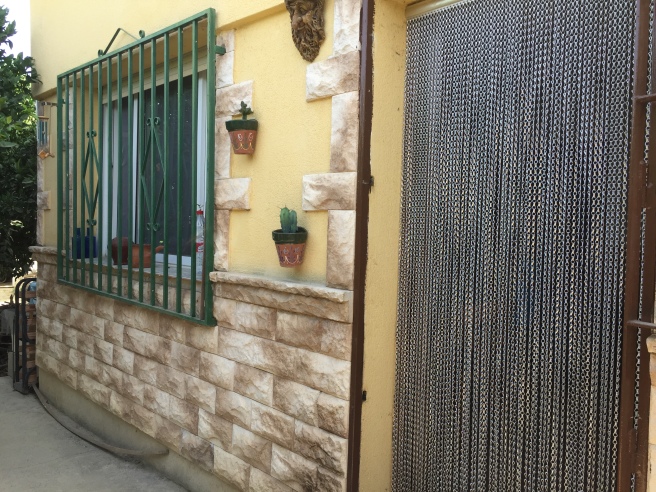 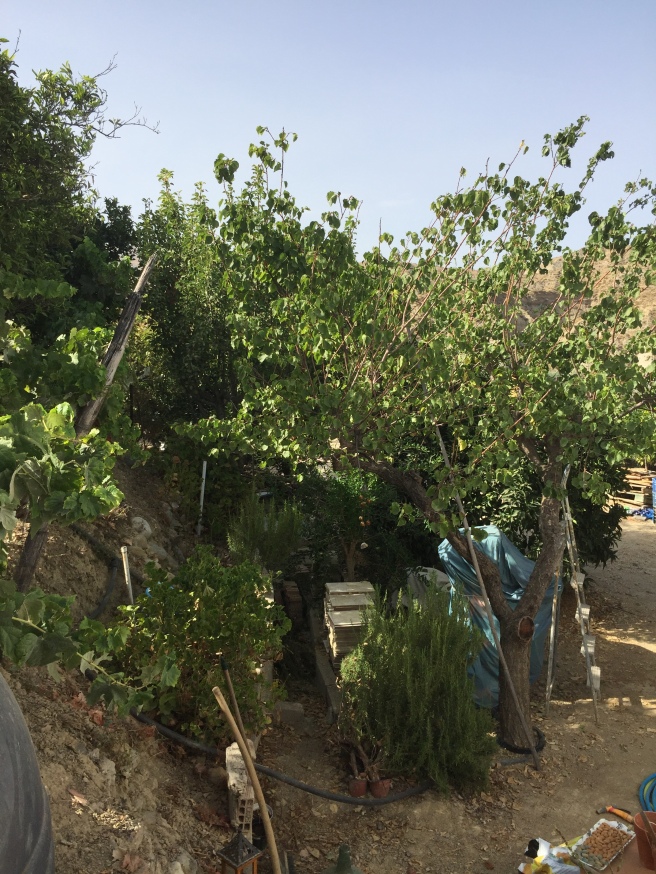 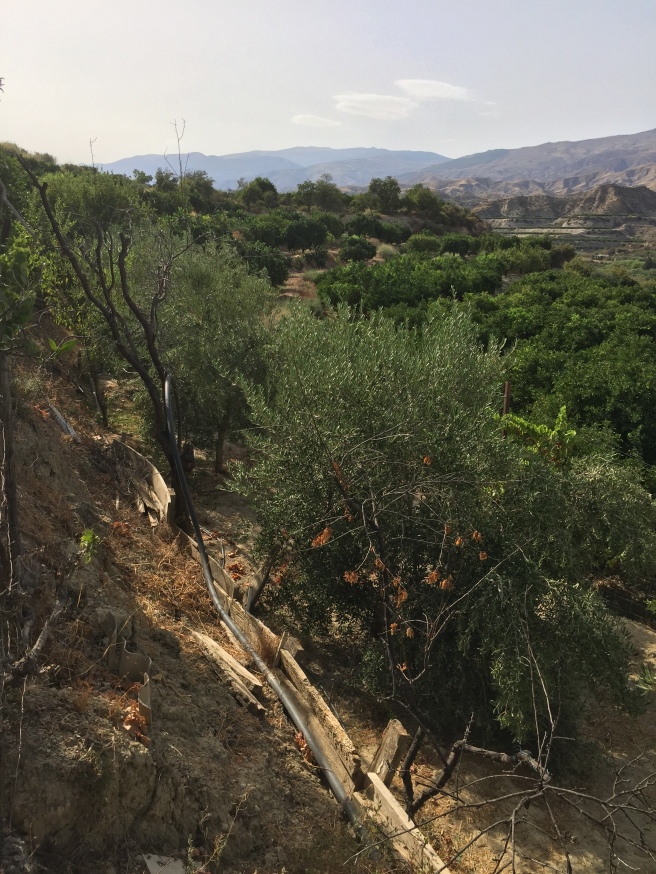 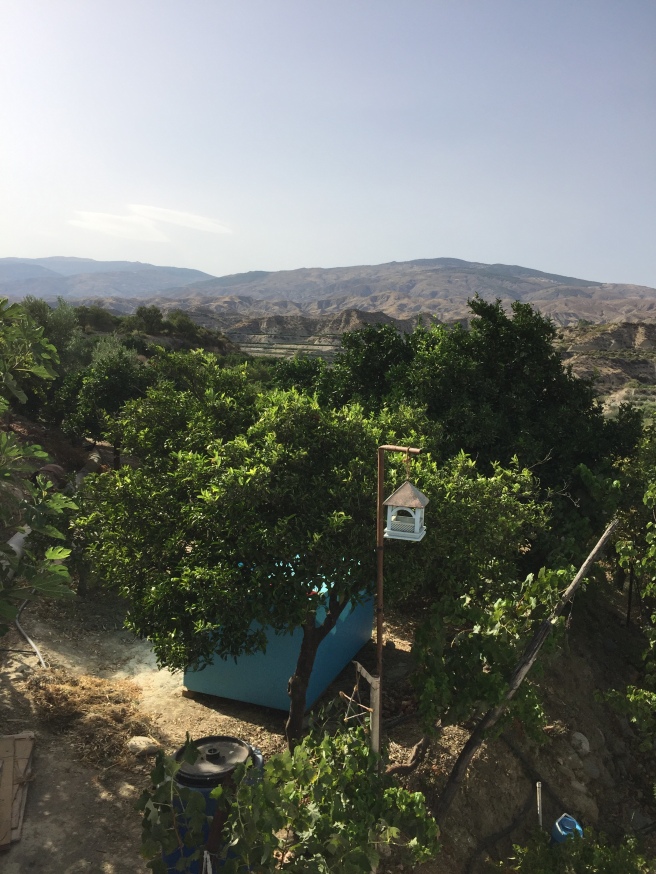 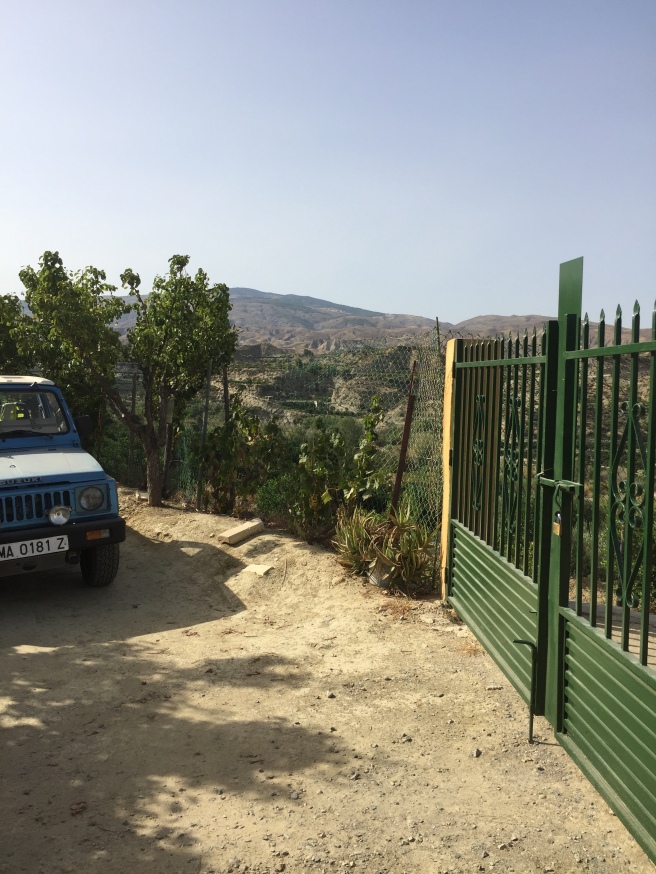 2 thoughts on “Where we are and some pics!”