It’s been my opinion for many years that the day would come when Mother Nature, like an angry Mum, would just go ‘stop, that’s enough’ (in that tone of voice that only Mums have!). Do you think we’ve reached that point? 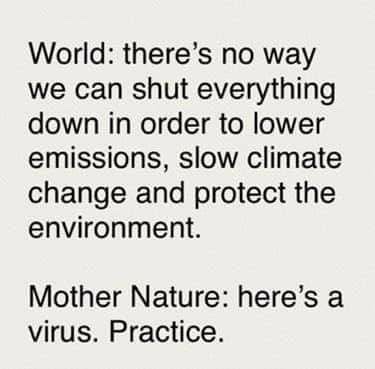 I mean, look at what we’ve done to the planet …

Climate change – arguments are there that it’s a natural cycle of our planet and other arguments that we are the cause – I sit somewhere in the middle on the fence in this one, but what I do know is that the levels of pollution that spew out are harming us, the animals and our planet.

Deforestation – I mean, really, we need trees to survive, but that hasn’t stopped us cutting down hundreds of millions of acres of natural forest across the globe. One and a half acres of forest is cut down EVERY SECOND.

Over extraction of minerals and natural resources go hand and hand with hyper consumerism and waste. The stuff we throw away, stuff that we probably didn’t need in the first place … filling our oceans with rubbish, killing the wildlife.

Mono farming – we are losing soil at an unprecedented rate across the planet – some reports suggest that within 40 years over 30% of the worlds arable land will become unproductive … think about that … and with a booming population that is estimated to be heading towards 9-10 billion within 50 years, our planet will not be able to sustain us.

In just a few weeks of the virus outbreak, skies above smog chocked cities are clearing, and even the canals in Venice have fish returning …

So, the big question – has Mother Nature decided to act now, in time to be able to recover the planet before we finish it off for good?

Or are you a conspiracy theorist … is this Mother Nature or a man made weapon?

For the first time in most peoples lives, we actually have time, being stuck in our homes, to think about these things.

Maybe we should all think about what we could change in our lives if / when we get through this? We’ve got to learn something from it, haven’t we?